Intel‘s AES New Instructions AES-NI is a encryption instruction set that improves on the Advanced Encryption Standard (AES) algorithm and accelerates the encryption of data in many processor familys.

AES-NI is Intel’s dedicated instruction set, which significantly improves the speed of Encrypt-Decrypt actions and allows one to increase AES throughput for:

The general speed of the system depends on additional parameters.

Check Point supports AES-NI on many appliances, only when running Gaia OS with 64-bit kernel. On these appliances AES-NI is enabled by default. AES-NI is also supported on Open Servers.

If it is not available, the following message is displayed:

If AES-NI is not enabled, it must be turned on in the BIOS (if available). Typical way for Open Servers.

It can also be checked if the CPU provides AES-NI. For this the following command should be executed. Here “aes” should now be displayed.

A little bit of reverse engineering.

Check Point uses OpenSSL as library. Therefore the command “openssl” is provided as “cpopenssl”. This gives us the possibility to execute all openssl commands. With this I tested a little bit and came to the conclusion that performance measurements are possible with the following command. So you can test the performance differences with enabled and disabled AES-NI.

Warning notice: If you execute this command you have 100% CPU usage on the firewall for 20 sec.

After these results I would always recommend to activate AES-NI and AES is preferred to 3DES because it offers many performance advantages through the hardware acceleration.

With the following command you can test and compare all encryption methods. After these results I would always recommend to activate AES-NI and AES is preferred to 3DES because it offers many performance advantages through the hardware acceleration.

Warning notice: If you execute this command you have 100% CPU usage for a long time! 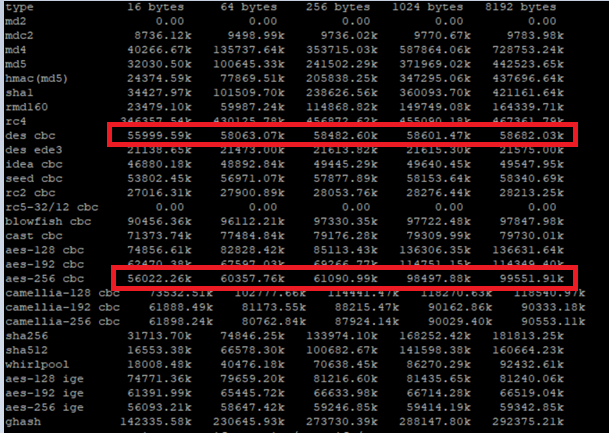 This makes it possible to compare encryption algorithms. It shows that e.g. AES 256 is more performant than DES. Therefore AES 256 should rather be used for VPN connections than DES or 3DES. This is also well described in the following SK Relative speeds of algorithms for IPsec and SSL.